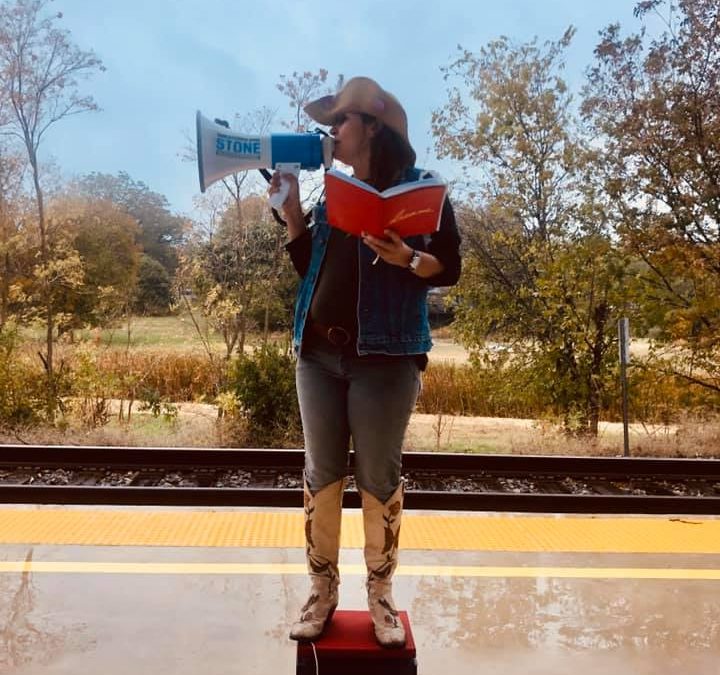 Yes, that’s what I’ve been singing into my enormous bullhorn before stepping up onto my ‘soapbox’ (really a milkcrate) to give brief stump speeches on the train platforms.

I definitely got folks’ attention from San Marcos to Detroit and back.

And, truly, that was the idea. I’m hoping to gain as much attention as possible to raise awareness that…..Ahem…

The more that people know and understand that the Texas Railroad Commission’s actual role is in regulating oil, gas, and pipelines throughout the entire state, the better. The more informed voters are when they vote in the March 3rd Democratic primary and, of course, when they vote again in the November 2020 election, the better.

So, if I’ve gotta ride thousands of miles of railroad tracks as a tool to stimulate discourse and change the debate, then by golly, that’s what I’m gonna do.

The train is not only a very safe mode of transportation, it has lower emissions than travelling by plane or car. It serves as the perfect *vehicle* for disseminating information and *mobilizing* voters.

Alright, so how was my trip?

Well, the goal was to get to Detroit to attend the Progressive Change Campaign Committee (PCCC) training. It was the last of the PCCC’s intensive trainings being offered in 2019, and I was invited to attend after a selective application and interview process. I was also awarded a housing scholarship. All I had to do was simply get there.

The roundtrip train ticket was $383.00 (cheaper than flying too), and while yes, that’s more than 10% of my ballot access filing fee, it was certainly worth the expense.

I had been planning to use the trains to campaign since I decided to run, so this was perfectly timed to get my little tuchus on the train. I had to figure out my speech and figure out how to pack efficiently enough to be self-sufficient in carrying my luggage AND carrying my bullhorn and soapbox without assistance.

I discovered that a thick, 100-year history book, gifted to me by my sorority sisters when I graduated, was the perfect platform for offering more secure footing on top of my milkcrate-soapbox when I stood on it. I figured it was okay for me to stand on this special book because it would allow me to be supported by the strong women who have come before me. It would also help me not to fall.

Then I set out to practice in front of people.

I went to open mics. (I’m a comic, and that’s how I work stuff out. I did the same thing when I was working on my TEDx Talk.) Some of the mics were awesome. Some, not so much. It usually depended on the host of the open mic in determining the vibe of the crowd’s understanding and acceptance of what I was trying to accomplish with my time on the mic. Interestingly, male hosts were far more affable than that female host one night who was really just awful to me about my practice sesh.

Meh. You win some. You lose some.
I can’t be everyone’s cup of tea.

So, it was all very good practice.

Anyway, I want to yammer on about the whole experience and tell you all about the speech I gave *sans* bullhorn for an audience of one–a woman who was either suffering from drug addiction or mental health illness or both–and I’d also love to tell you about how special it felt for me to give a speech about Oil and Gas while standing outside the old Ford building in Motor City, Michigan…but…

This feels too long for blog attention-span readership already, and I want to share my full speech that I performed on the first leg of my whistle-stop tour, campaigning for election to the Texas Railroad Commission.

I started by walking around and singing:

Then I stepped up on my sorority-book-mounted milkcrate, pressed the bullhorn amplification button, and proclaimed:

My name is Kelly Stone, and I’m running for Texas Railroad Commissioner!
What does that mean? And why am I standing here on this box?

Well, those are good questions!
We should all be asking more questions!

Here’s the deal.
THE TEXAS RAILROAD COMMISSION HAS NOTHING TO DO WITH THE RAILROADS!

They actually regulate Big Oil and Gas and Pipelines. The stuff that’s polluting our environment. And guess what? Those elected officials…the ones that are supposed to be protecting us…well, they are the very same oil and gas owners and insiders that are looking to increase their own profits. They don’t give a DAMN about our asthma or our cancer rates, and they SURE AS HECK don’t care about the endangered species they are eradicating from our planet.

It’s time for change!
TIME’S UP!

I believe the constitution says “We the PEOPLE!” Not WE the OIL. Not WE the MONEY. Not WE the lawyers, engineers, and lobbyists! NO!

And that’s what we have to become, y’all…a…WE again!

Rosie the Riveter showed us that WE can do it.

Then Miley Cyrus came along and said WE CAN’T STOP!
WE WON’T STOP!

And in 2020, we need to show the world that TOGETHER, we can take back our government and fight for our future; not just for our children, not just for our plants and animals; but for the future of LIFE on Earth.

The Lorax said, “Unless someone like you cares a whole awful lot, nothing’s going to get better. It’s not.”

Join me in doing what is right, and let’s stand on the right side of history together.

Why am I standing on this box?

When Truman campaigned on the train, people said he was crazy. And you know what guys?
HE WON!

He defeated Dewey because he took a risk, and he got people’s attention.

Do I have your attention?

THE TEXAS RAILROAD COMMISSION HAS NOTHING TO DO WITH TRAINS!

And it has everything to do with Oil, Gas, and Pipelines.

And unless people like us care a whole awful lot, nothing’s going to get better. It’s not.

I’m Kelly Stone, and I approve this message.