I came. I saw. I witnessed at the border. 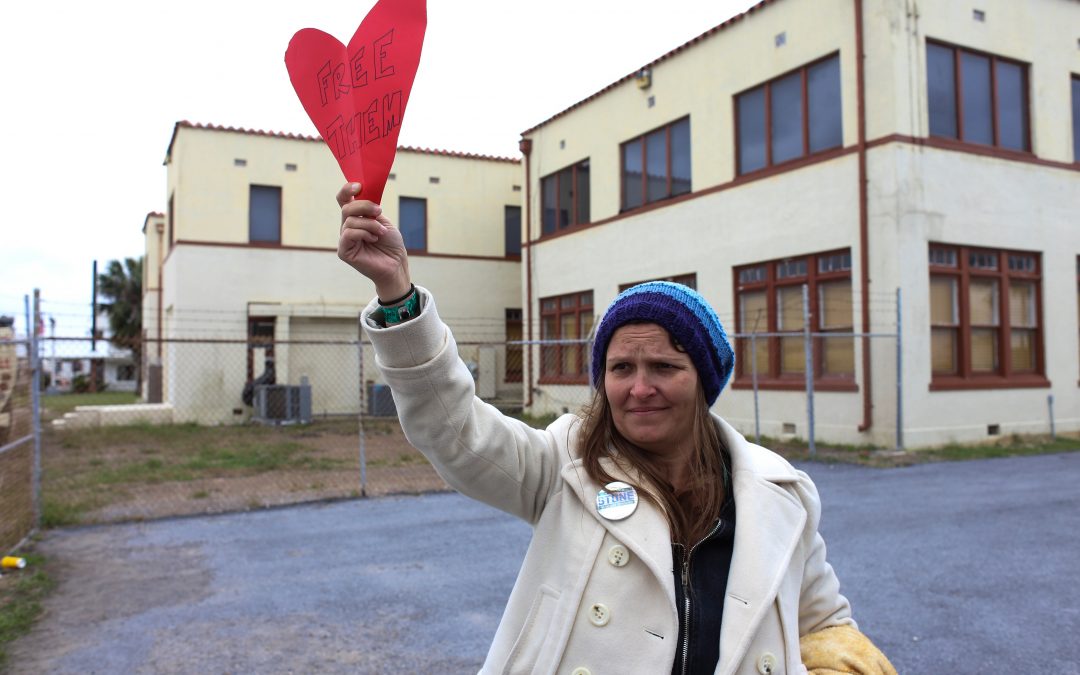 I went down to the border last week for Valentine’s Day. It wasn’t to enjoy a romantic Mexican getaway with my sweetheart–I don’t have a sweetheart right now (which is quite the blessing for a gal campaigning statewide). Instead of engaging in mass-consumptive purchases of chocolates and teddy bears, I chose to join passionate people who traveled from all over the country to witness at the border.

This movement, focused on the passive act of witnessing, began when Joshua Rubin left his home in Brooklyn and took up post, standing outside the Tornillo children’s prison with a sign reading “Free Them”. He wanted to bring eyes upon the human rights violations taking place right here in the land of the free.

Like many things that are out of sight, for most Americans, much of what’s taking place at the border is out of mind. It’s not in our faces. So, Josh brought his face to it.

I could go on and on about the background here, but I want to get to what I witnessed. For those of you interested, there’s a great documentary, Witness at Tornillo, where you can see more of how Josh proved that one person really can make a difference. (Spoiler alert: He helped get two kiddie prisons shut down.)

So, there I was, in Brownsville, Texas. I had come to attend the Love Over Hate protests and rally, and I arrived a day early, heading directly to the border for witnessing.

Almost immediately after we arrived, Josh called out a phone number, instructing witnesses to call and advocate for a family with disabled children being held in Mexico under “MPP”. This is the newly implemented “Migrant Protection Protocol” that’s serving as a virtual shutdo 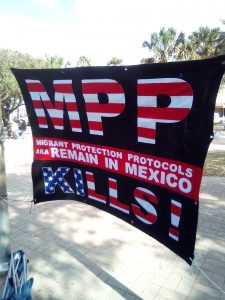 wn of our border. Disabled children are exempt from MPP, but this was being enforced upon them nonetheless.
As a newbie to this form of protest work, I quietly observed and took in the scene. I turned on my phone and went live on Facebook. I decided that if the idea was to bring more eyes upon what was taking place, then I could use my platform to increase visibility.

That’s what I’m doing here, right? I’m using my platform to bring more eyes and awareness to important issues. This is also what I plan to do when elected to statewide office–use my platform to bring greater voice to systemic oppression. I’m running to bring more attention to the lack of transparency in our fossil fuel regulation which not only affects Texans but our entire planet.

Increasingly, folks have started reaching out to me for help. I’ve had women calling me up from small towns in Texas, where they are fighting against the oppression of extremists, implementing illegal “sanctuary city for the unborn” ordinances. They’re asking me to use my voice and to amplify theirs. I’ve had teachers reaching out for help addressing their concerns for limited handwashing stations or hand-sanitizer dispensers in the wake of communicable illnesses spreading in their schools.

Yes, I realize that I’m running for Texas Railroad Commissioner and that this position cannot create or implement policies to address access to women’s healthcare or implement health interventions in the schools. However, as a woman holding a statewide office in Texas, I could help bring more eyes and attention to much more than fracking, air pollution, and the theft of corporate eminent domain.

So…there I was, standing on the Texas side of the bridge that connects us to our Mexican neighbors…

I was witnessing and standing with my protest sign when a young man came walking out of the border security facility. We had lots of signs with statements condemning MPP, and upon seeing us and these signs, the young man lifted his arm into the air and cried out, “MPP!”

He was holding a plastic envelope with paperwork inside, and one of the veteran witnesses knew immediately what that meant: He’d made it through.

I witnessed his emergence into safety and his fledging steps into the “American Dream”. 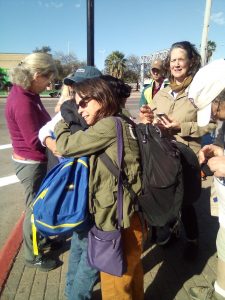 His name was Jose.
He was hungry.
He was overwhelmed.
He needed water and a phone to call his family.

We gave him food out of our ice chest and a chair to sit and take a moment to collect himself. He’d come from Honduras and had been held by MPP for 6 months.

His mother answered his call, and I witnessed his tears, his expression, his relief to hear her voice.

It was emotional for me to observe. I could only imagine his mother’s tears, her expression, her relief to hear his voice.

I thought about my sons and how I would feel, hearing one of their voices after at least 6 months of not knowing…

Some of the witnesses took him to a church that offers assistance to migrants and refugees, and after Jose had been whisked away, one of the witnesses said, “Kelly, you just witnessed a unicorn. It usually takes six months to a year of witnessing before you see one make it through like that. He had a 0.1% chance, and I can’t believe you just saw that on your first day in your first couple of hours!” 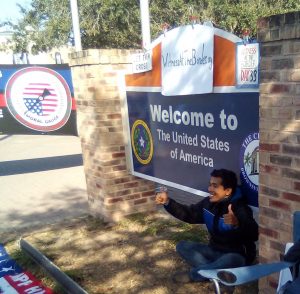 I felt humbled to have been present for such a special moment, and I knew that I was there to yield important lessons and insights to carry forward as I carve my path to become a political leader in Texas.

The next morning, I woke up at 4:30 am to be at the Brownsville airport at 6:00 am for the first round of deportation flights. (Josh referred to them in an interview as extermination flights.)

This was hard to witness.

It was Valentine’s Day, and the goal of this gathering was to share messages of love for the women, children, migrants and refugees being sent back into the dangers they’d fled from. Some were going to their country of origin. Some were being dropped into entirely different countries. Many were bound for death.

“¡Los queremos!” We called out to the busses where innocent people were being forced to hunch over and keep their heads down. We waved at the busses with red hearts, marked with various messages. Mine read “Free Them” from Josh’s original Tornillo sign.

One woman, who’d packed up her whole life and moved to Brownsville purely for the work of witnessing and activism, cried out as loud as she could. “¡Los queremooooooos!” I could hear her voice becoming more desperate. “C’mon, you guys! I need more voices for them to hear us! I’m just one voice!”

I empathized with her desperation and feeling so small and singular.

I gulped back tears as I was hit with a crashing wave of traumatic memory. We were calling out so that the children could hear our voices and know that they were not alone. It felt futile, but it was all we could do. It brought me back to my oldest son’s birth when he suffered from meconium aspiration. His body was blue when he emerged, and I thought I had just given birth to a stillborn.

“Call out to him!” the midwife instructed. “He needs to hear your voices!” she commanded as she suctioned the meconium from his nostrils and performed CPR.

“C’mon, Mayne! You can do it! Breathe!”
I choked on tears.
It was the first time that I was saying his name out loud to him, and it was to encourage him to live. To live.

The act of shouting “we love you” in Spanish to people who were fighting for their lives felt overwhelmingly similar to the futility I felt when I was desperate for my baby to survive.

I want to share all the details about how ICE employed several intimidation tactics toward us, how I saw them patting down asylum-seekers who were shackled by 5 points as they boarded the planes, how my camera access on my phone became mysteriously dysfunctional until I left Brownsville, how passionate and emotional the interfaith vigil and Love Over Hate rally was later that day, but for brevity, I need to skip ahead to the conclusion of my witness experience. 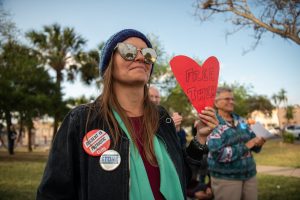 I ended up purchasing a plane ticket to leave Brownsville. I struggled with this decision because I’ve tried to be as waste-conscious as possible with this campaign. I have not used a plane for any of my statewide campaigning, and I deliberated over taking the 11-hour bus ride through the night to arrive just in time for my next day’s speaking engagement vs. traveling on a plane for less than 4 hours which would allow me to catch a full night’s sleep and a shower before my candidate forum in Houston.


I guiltily chose the more convenient option, and I could feel Greta’s side-eye flight-shaming me. The Ojo!

I had to leave the rally early, and I didn’t get to say good-bye to my new witnessing compadres. I arrived at the tiny airport with a few minutes to spare before boarding. I walked into the crowded boarding gate and looked around for a place to sit. That’s when I locked eyes with a familiar face.

I quickly sat down next to him, staring, knowing that I’d had a conversation with him before but just couldn’t quite place how we knew each other. He looked at me like I was a totally creepy weirdo and said, “Yes?” with an inflection that meant “Can I help you?”

I said, “We know each other! We’ve talked to each other somewhere before!”

He shook his head and started to say, “Yesterd…” when I interrupted… “You’re Jose! OMG! We met yesterday!”

He hugged me.
I hugged him.
We hugged for a good hard moment.

I wanted to take a picture of us, and he did too. My camera still wouldn’t work on my phone. I thought, well, this is a moment I’ll just have to savor in my heart.

He pulled out a red button that read Free Them to show me his souvenir from his welcome reception of witnesses. I pulled out my red heart with the same message and asked if he’d like to keep it. He excitedly accepted.

As I handed it over to him, I knew I was gifting the most important Valentine’s Day card I’d ever given in my life.

I also offered him one of my homemade campaign buttons as a way for him to save my name and keep in touch with me.

As he boarded the plane ahead of me, I whispered to him “¡Los queremos!” and we both shared tearful smiles. We were sharing a connecting flight through Dallas where he would continue on to Florida, me to Houston. I felt like I got to see a unicorn twice, and it was a clear sign that I was in the right place at the right time. I had made the right choice. 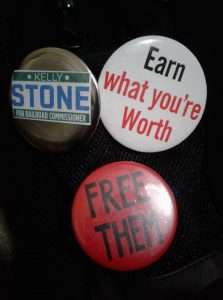 This week, he sent me a photo of his memory buttons and said, “I will take you on all my trips, because I know that you accompany me at all times.”

I was a witness.
Now you are too.

I’ve got much work ahead to raise awareness and fight for justice.
I’m starting with the Railroad Commission, and I’m taking you with me.